A Very Old Commode to an Occasional Chair 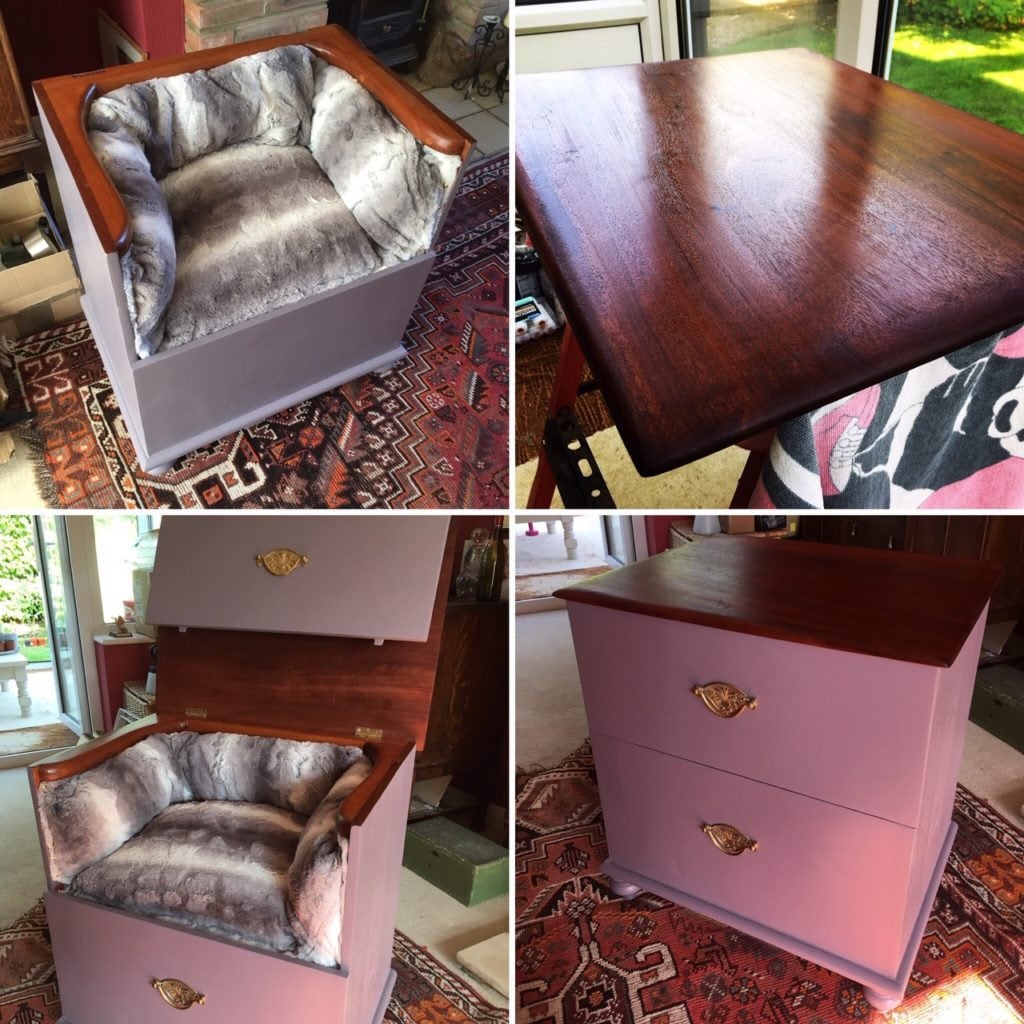 I've recently become friends with a family that specialise in house clearances. I recently went to a barn where they keep their stock and picked up a few items to upcycle.

The first one I decided to work on is a bit of a challenge and will be a work in progress. Namely because the item in question isn't your average upcycling project, it's a very old and rather fancy wooden commode. That's a toilet for those not in the know. The picture below shows it after I'd taken the lid mechanism off. Naturally the hole where the little potty went will be coming off and in time, it'll become a hopefully splendid occasional chair.

Sadly, the toilet function will no longer be available once the project is completed. 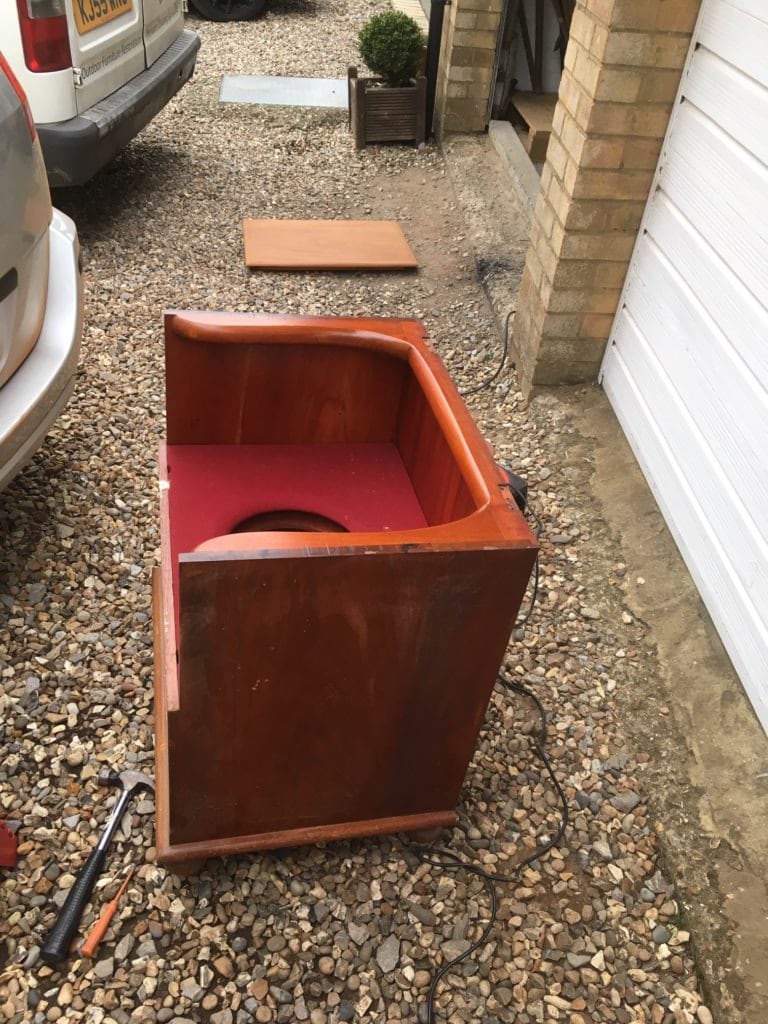 The first job was to take of the top and front which, when the lid was down disguised the commode as a chest of drawers. Handy if you were in the lounge and just knew you would'nt make it. The chest of drawers magically transformed into a place you could happily defactate and carry on with the crossword.

Moving on, I sanded down the lid and begin the task of removing the layers of varnish to the entire thing. Nitromors was used and it took several attempts to get it back to something I could sand properly. 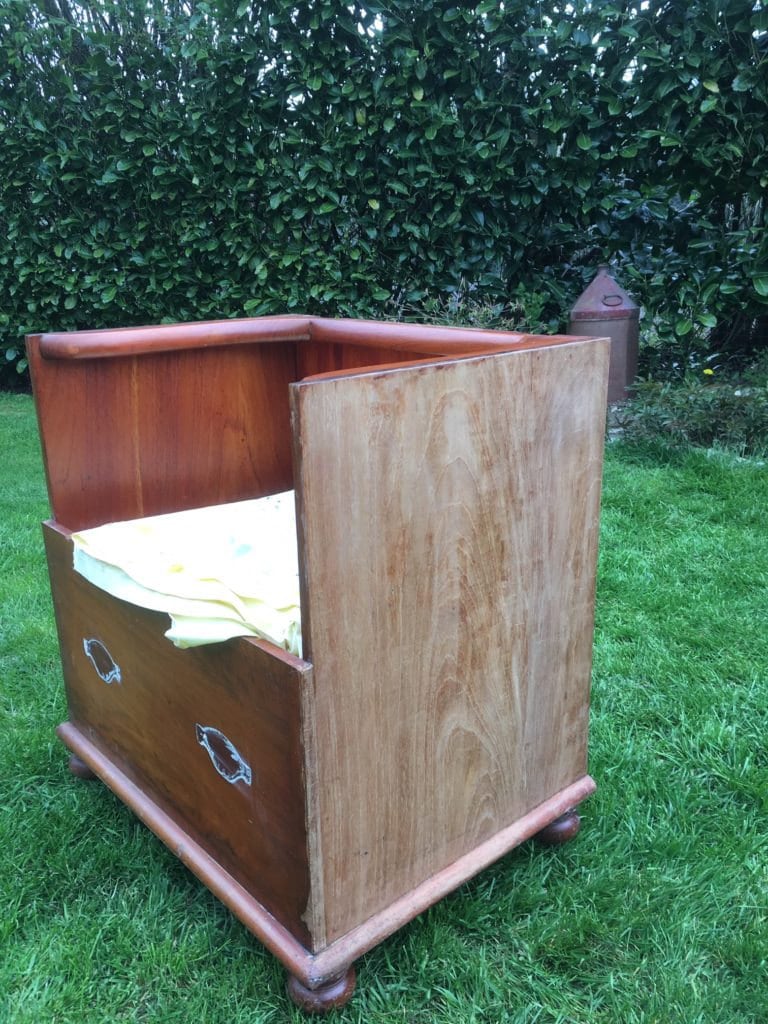 Meanwhile, the lid came up much easier and I began applying the first layer of danish oil straight away. 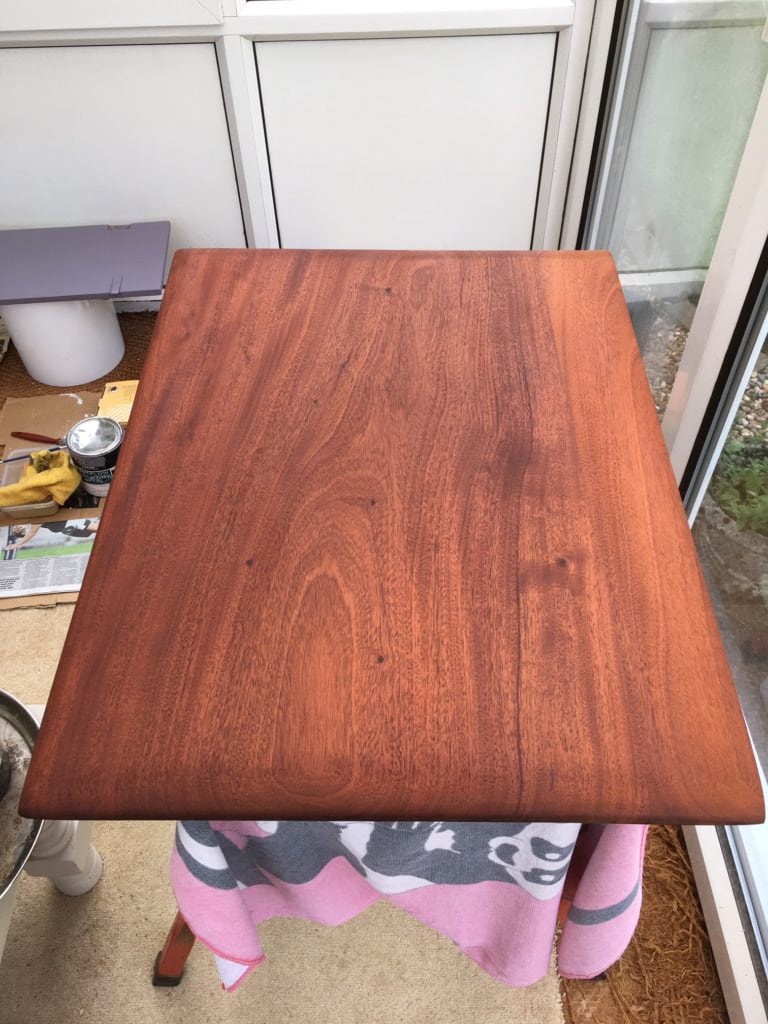 As the commode was rather old, and we are talking over a hundred years here, it had a good point in that it was very solidly built, no decay and in great nick. Obviously though over time there were a few nooks and cranny's that had developed over the decades. I decided to go with a paint from a local company that have these fancy machines that mix up the exact colour you want there and then. Modern technology eh? The paint was a light purple colour, rather unimaginatively named 'CPLE271'.

I did a base coat and let it dry then filled all the little bits that needed a bit of filler. Using a quick dry filler I was able to sand it back fairly quickly and get on with the second coat and carry on Danish oiling the lid and arms. 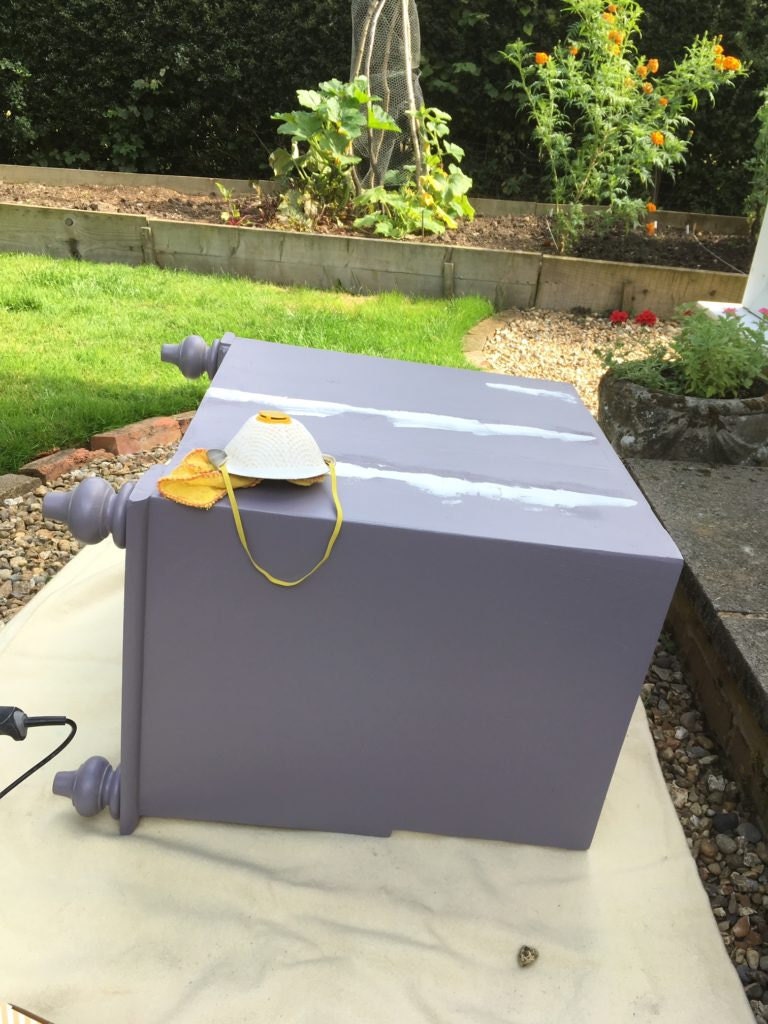 I also at this point removed the 'throne' of the commode (The bit where ones bottom went once upon a time in a mansion somewhere) and replaced it with a strong piece of board to provide a seat to sit on, as opposed to a toilet seat. I also finished oiling the lid. 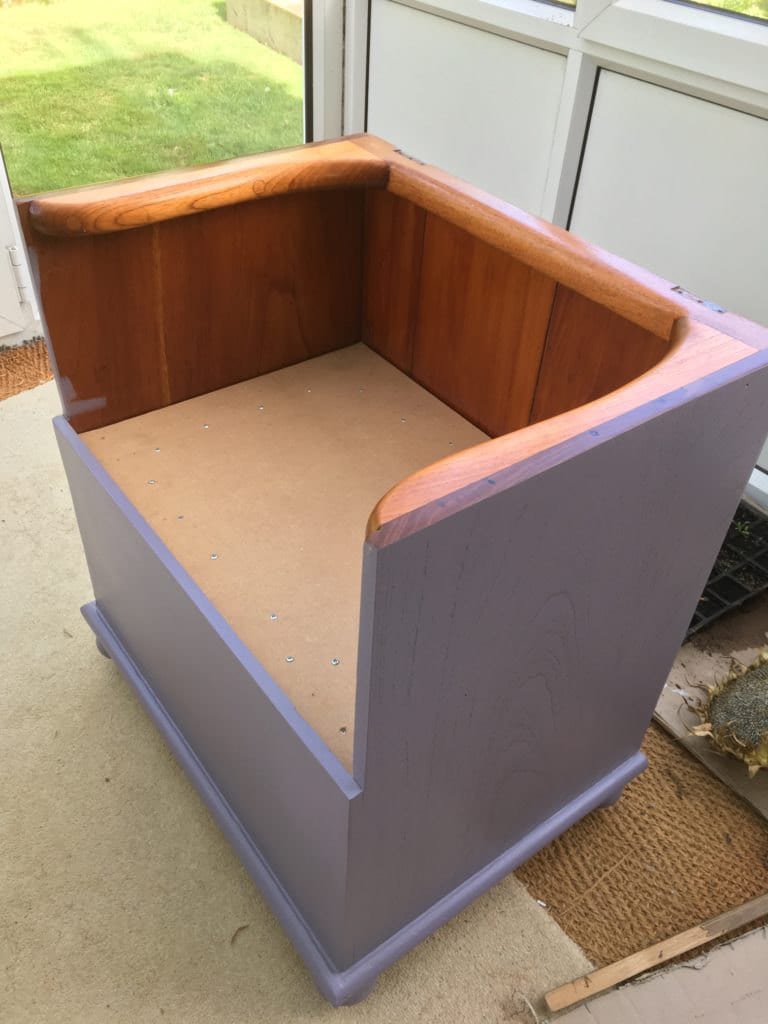 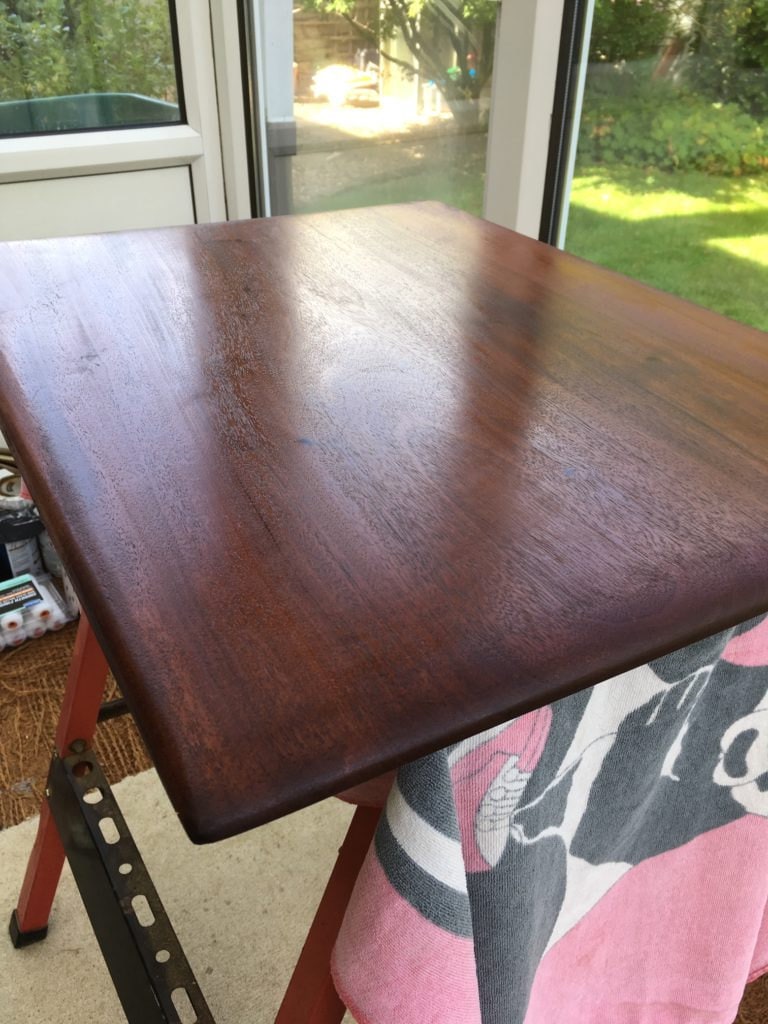 It was now time for phase two. Now I don't mind admitting I can do a fair bit with wood and other things, I'd even go as far as saying I occasionally, though rarely, experience glimmers of creativeness. That doesn't however mean I can make cushions or upholster in any way. Phase two therefore was assigned to my dear old Mother.

I purchased a throw, one of those soft fleecy ones you see draped over sofas here and there. It wasn't very expensive and a good job too because it was cut up into bits to make the inside seating area of the rapidly developing occasional chair. I left this in the capable hands of the master sewing machine operator and the results before fitting were outstanding... 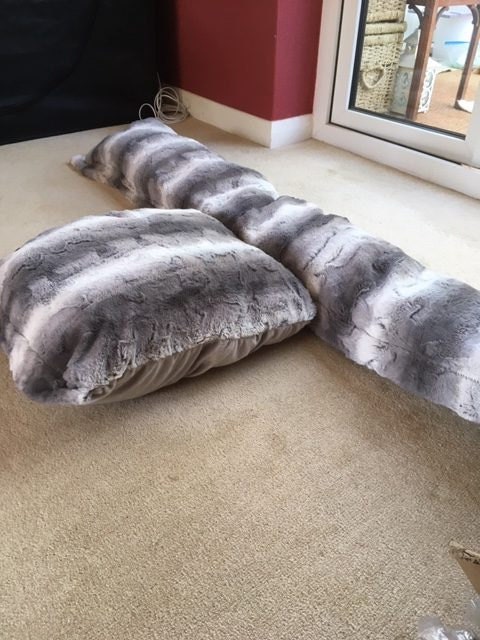 The next step is the attach the seat to the base and the long bit around the arms and the back. Incidentally I may start making and selling the long part. It's incredibly cosy and warm around your neck. Rather like a luxury upmarket version of those blow up things you put behind your neck to sleep on long haul flights.

I also need to polish up all the old fittings to reattach and they have many decades of built up dirt. So far I've used Brasso, white spirit, an old concoction of salt, vinegar and flour (Which worked best incidentally) and various combinations of all of them.

I'll be back with an update as soon as the seating is added and the fittings are shiny and the rebuild can begin. See you soon for PHASE THREE.

Finally after a bit of a break and a recovery after a nasty accident, I've finally managed to get the commode into a finished article... Take a look, quite a snazzy addition to any living room and great when you run out of space. 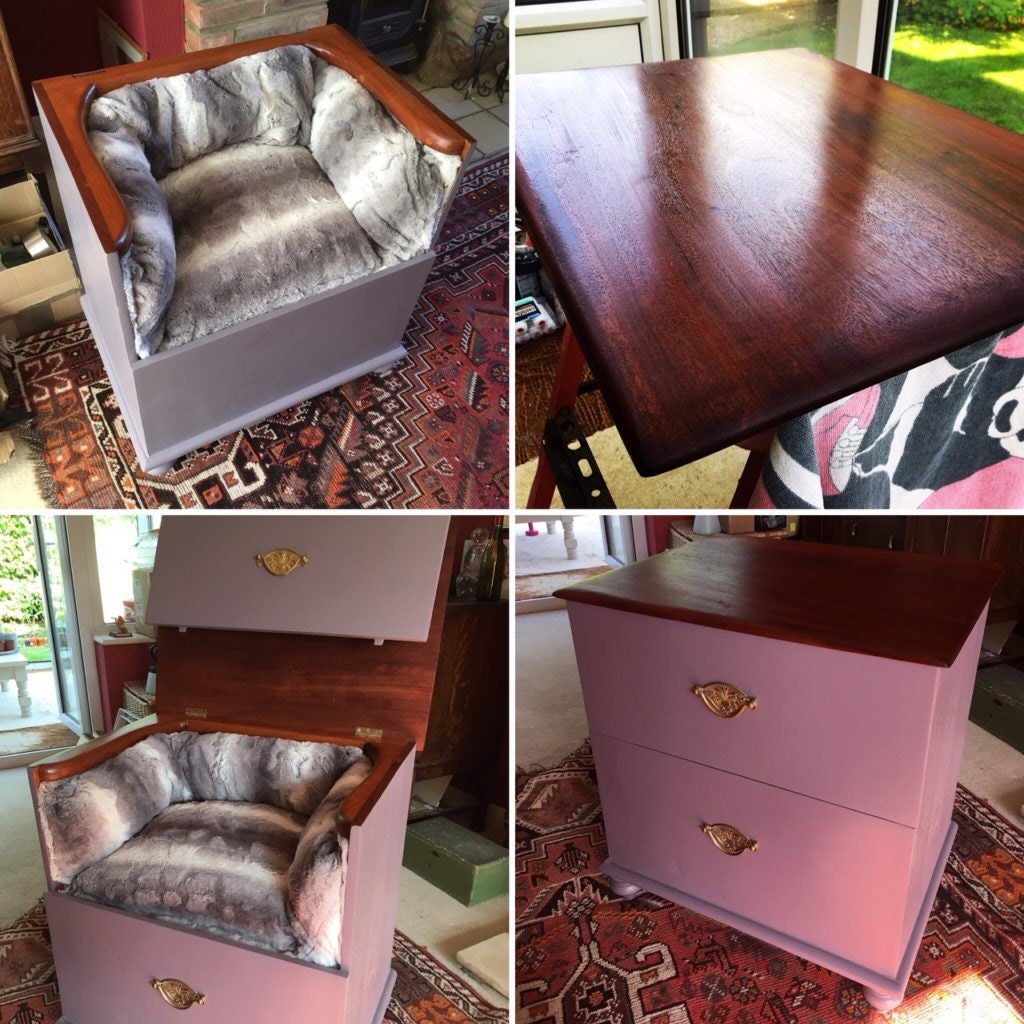